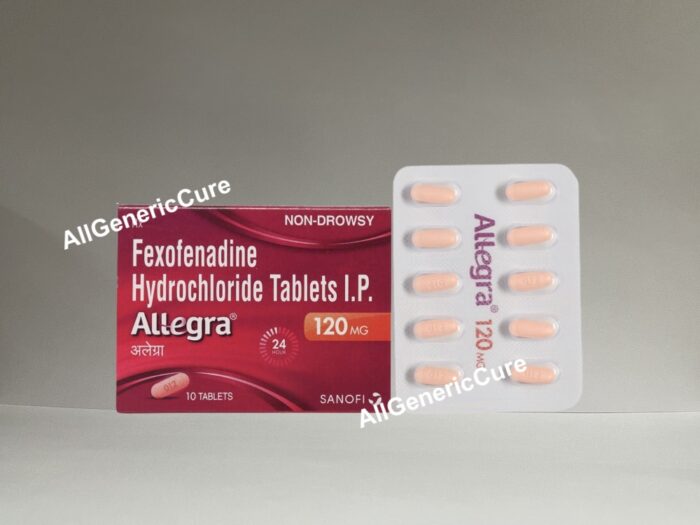 Allegra is an antihistamine that is used to treat the symptoms of hay fever and other seasonal allergies. It works by blocking the action of histamine, a substance in the body that is responsible for the symptoms of allergies. Allegra is available as a tablet in 120 mg and 180 mg forms. It is usually taken once daily. The most common side effects of Allegra are headache, fatigue, and dry mouth.

Allegra is an anti-allergic drug that contains fexofenadine as its active ingredient. It belongs to a group of medications called Ant Allergy. It is a prescription drug that helps in relieving allergy symptoms which include hay fever, runny nose, unstoppable sneezing, and watery eyes. The drug works by blocking histamine which gives instant results and releases from any kind of allergy.

Histamine causes allergy. Skin allergy includes redness on the skin with red small bumps appearing on the skin. Such symptoms appear throughout the seasonal change and are widely common amongst various age groups. To Buy Allegra online, visit AllGenericCure and order for the cheapest price online in the UK, and USA.

What is Allegra used for?

Allegra is an anti-allergic drug. Contains Fexofenadine 180 mg as its active ingredient. It is a well-known treatment for allergic conditions which include running nose, watery eyes, stuffiness in the nose, skin swelling, and redness.

Where to buy Allegra?

Buy Allegra online at AllGenericCure for the cheapest price online. Order for cheap in

Side effects include the following

How to use Allegra?

Allegra is prescribed by a doctor during the seasonal change to patients who suffer from seasonal changes causing runny nose, watery eyes. The histamine inhibitor drug fexofenadine, when taken, responds accordingly and relieves the allergic symptoms immediately.

The antihistamine drug Allegra is anti-allergy medicine. Manufactured by Sanofi. It helps in the treatment of various skin allergies which includes the development of red bumps on the skin, redness, and urge to scratch on the allergy marks.

When you take Allegra it starts blocking the agents such as histamine which causes skin allergy.

Dosage is strictly according to the prescription. You must follow your doctor’s prescription carefully.

Overdose: You should not overdose Allegra. It can cause side effects and make you feel dizzy.

Double dose: Do not double dose.

Where to buy Allegra 180 mg online?

Buy Allegra at Allgenericcure. We ship in