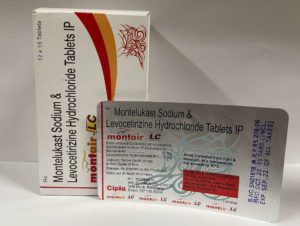 Montair LC is fast-acting medicine also known as Anti-Histamine for treating allergic conditions in patients. Also available for kids in the name of Montair LC Kids the product is manufactured by Cipla, India. It is prescribed by doctors for running nose, skin rash, stuffy nose, headache, watery eyes. The active ingredient in Montair LC is Montelukast and Levocetirizine as the active ingredient.

Montelukast the active ingredient is a widely accepted medicine for the condition called swelling in the lungs which cause tightening of the lungs and narrowing of the air passage making it difficult to breathing. Montelukast is an oral medicine for such allergen-causing condition eases breathing after taking. Usually prescribed to kids in asthmatic condition (who are unable to use asthma inhaler/mild symptoms of Asthma)

Why does allergy happen?

The most common cause of allergy is dust and pollen inhalation which causes shortness of breath or sometimes a person starts sneezing continuously. Occasionally one of the most common reasons is a seasonal change causing seasonal rhinitis. A combination of Montelukast and Levocetirizine in Montair LC helps in treating the condition as fast as possible.

Some of the conditions are listed below

Side effects of Montair LC

Side effects of Montair LC are listed below